Among our pets, inflammation of the ear canal is very common, almost considered a “people’s disease”. Despite the differences in the underlying causes, the symptoms are quite similar. Head shaking, frequent scratching of the ear area or unpleasant-smelling secretions appearing at the exit of the pinna call attention to the fact that something is wrong with our pet’s ears.

The triggering causes can be many, most often different fungi and bacteria, less often parasites (dandruff) or possibly allergic causes play a role in the formation of inflammation. During the summer season, the dog’s sworn enemy, thrush, also often gets into the dogs’ ears, causing sudden, violent head shaking.

What should we do if we notice the above symptoms?

If possible, contact a veterinarian as soon as possible, who will use a suitable instrument (otoscope, CCD camera) to look into the dog’s ears and determine what is wrong. It is not worth experimenting with home treatment, most of the time we just waste time and delay the animal’s recovery. 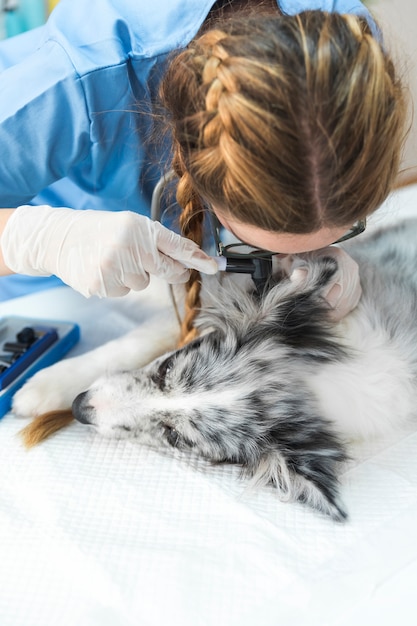 The activity of the veterinarian will only be effective if, after establishing the appropriate diagnosis, he starts targeted treatment, e.g. removes earwax or, if mites are detected, prescribes a suitable anti-mite preparation. In persistent, prolonged cases, a microbiological examination of the ear discharge may become necessary to know exactly what pathogen we are dealing with and what medicine is needed. Rarely, the only manifestation of an allergic reaction in the animal is inflammation of the ear canal, which is usually difficult to treat and has a slow course. Finding out the allergic background is often not an easy task, requiring a great deal of expertise. The disease is also not unknown among cats, although it occurs less frequently. Among the causes, the most common is parasitic otitis media, which is caused by mites parasitizing the ear, which can be seen with a magnifying glass. The symptoms are similar to those in dogs – shaking of the head, frequent scratching of the ears, large amounts of blackish-brown, poppy seed-like contents accumulate in the ear canal. Mites are parasites only in the ears of cats, they are harmless to other animal species and humans. They are quite stubborn organisms, and their eradication from the cat’s ears is usually only possible with repeated treatment and persistent ear drops.

At the Szent Bernát’s dermatology clinic, we also welcome patients who have long-standing recurring inflammation of the ear canal. Registration at 06 1 295 3085.